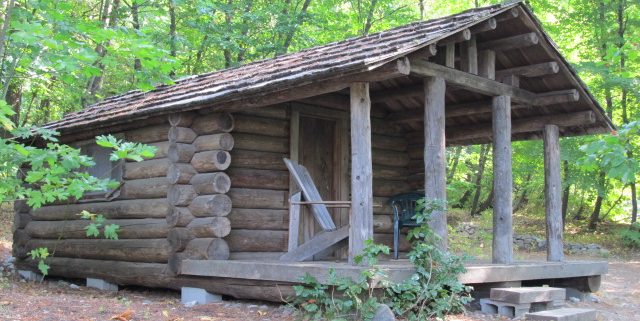 One of the most common questions we get at the Ranch is “What’s the story on that cute little cabin behind the Cookhouse?”

The short answer is that it was built by Cliff’s father, Ray Courtney. However, that answer does not even begin to scratch the surface of the rich and enchanting history of the “Trapper Cabin.” Read on for the rest of the story….

Ray Courtney grew up as the youngest of 4 children. While the older kids enjoyed smoking and listening to the radio with their father Hugh, Ray didn’t smoke, and preferred peace and quiet in the evenings to work on projects or write.

The Courtneys grew up in a self-sustaining atmosphere – if they couldn’t make it themselves, they generally did without. So Ray learned at an early age to build things and live off the land.

At age 15, he decided to build his own cabin. He set about falling trees and clearing land in the woods out behind their barn. He then started building a 12×20 foot log cabin with a cedar shake roof and a large porch where he could keep a supply of firewood.

Ray’s cabin served him well – giving him a place to retreat to when he needed space. He sculpted Cedar slats to fill all of the voids instead of using chinking, and built in a pine desk for his writing. Complete with a wood stove for warmth and a kerosene lamp for light, it had everything he needed.

In later years, the cabin started travelling – eventually ending up at its current location at Stehekin Valley Ranch.

Originally, the cabin was on the Courtney Family homestead – on the opposite side of the River from the Ranch.  Unfortunately, Curt Courtney, one of Ray’s older brothers, sold that piece of property where the cabin was located to the National Park Service. At that time the cabin was moved down lower on the homestead to a piece that Ray owned himself.  When Cliff started the Ranch, he decided to move that piece of family history as well – ensuring that it would be remembered and maintained for folks to enjoy. The cabin was taken apart log by log and re-assembled where it stands today. 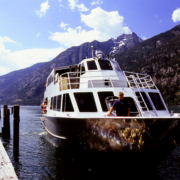 Lady of the Lake – SOLD! 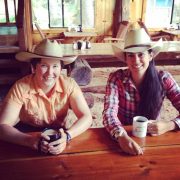 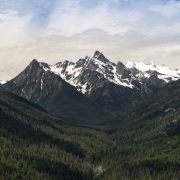 Best Day Hikes in Stehekin: Part 3 – Going to the Top! 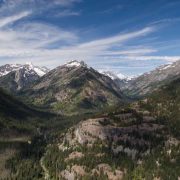 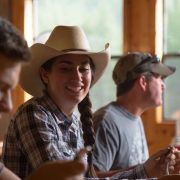 Act Fast! Early season openings are waiting for YOU! 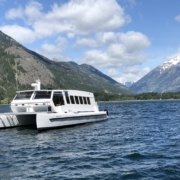 Some advice about transportation to Stehekin
Check Availability & Book Now

Just hanging around with the wildlife… #blackbea

My oh my! Sometimes you just have to stop and star

Peaceful power. Rent an eBike at the Ranch and vis

Ranch guests checking out Rainbow Falls. With a co

Hammock time is often the best time! What are you

This view never gets old! Loving the sunshine!! #s

Here’s a glimpse of our newest accommodation. We

It’s official! We are open for the summer season

Skydive Chelan are doing their thing at the Stehek

Fun picture book for sale at the Ranch this year!

The calm before the storm…We are all ready to op

It’s “Bike to Work” Day! Maximus and I are r

A spring morning on the mudflats. #stehekin #mudf

Maximus came along on a stroll across the mudflats

In honor of Pi Day - Calories are worth it, don't

Our 2022 bus schedule is now available on our webs

The Route to Solar Power at the Ranch
Scroll to top